Nearly 3 years ago I started researching mechanical keyboards and wrote a post outlining my discoveries. Shortly after that post was written I made my buying decision, but that decision was not an easy one. A keyboard is something I use a ton, not to mention mechanical keyboards carry a fairly hefty price tag, but they’re worth every penny…let me tell ya.

Deciding on the switch type

After watching a few videos, reading loads of forum posts from actual users, then doing my own research on the matter…I determined that the Cherry MX Brown was the switch for me.

I wanted a switch type that would be great for typing and gaming — two activities I actively engage in. Brown switches are sort of like a cross between the Blacks and the Blues, so you get the actuation of the Blue, but with the firmer and more deliberate keystroke of the Black. If you’re someone who types a lot, e.g., a blogger…who also likes to play games, then I highly recommend the Cherry MX Brown switches.

Deciding on a manufacturer

Once you start looking into mechanical keyboards you’ll see there are quite a few different options available. I’ve noticed that there are even more choices now than when I first started shopping for one nearly 3 years ago; however, my buying criteria knocks a few of them out of the runnings right away…

I want a really good keyboard

My number one obsession is with build quality. I don’t care about a bunch of fancy lights, switches, dials and macro keys…I simply want a keyboard that is built extremely well and does its job better or as good as any other in its class.

I’m a Mac user, so it’s important that the core features of the keyboard work on a mac.

At the time I was hoping for a backlit option, but I’m over that now. I used to like having all sorts of fancy lighting on my desk, but not any more. I’m all about the clean minimalist look, so although a backlit keyboard was a desire of mine then, now I wouldn’t even factor that in.

The Das Keyboard is a solid and competitively priced option. About the only reason I didn’t go with this manufacturer was because their keyboards have a mirror finish which can dirty easily and is not very forgiving with minor scuffs and scratches. That, and I prefer matte finishes. Still…you really can’t go wrong with this model I don’t think. I read loads of glowing reviews, so the only reason I looked elsewhere was more of a style preference.

One feature I love on the Das Keyboard is the addition of 2 USB ports. I wish mine had some. :-\

Pros: good price, 2 USB Ports, good build quality
Cons: Mirror finish which can be a magnet for fingerprints, smudges and scratches, no tenkeyless version (could be a deal-breaker for some people)

Note: If the Das Keyboard 4 had been out, I no doubt would have bought it. The 4 is truly a beautiful and well-built keyboard, with some really nice added features. It’s so nice that I may even consider ebaying my Filco. I did buy it and I am ebaying my Filco. 🙂

Deck keyboards had caught my eye because of the backlighting and superb build quality, but they are just too niche, in my opinion. 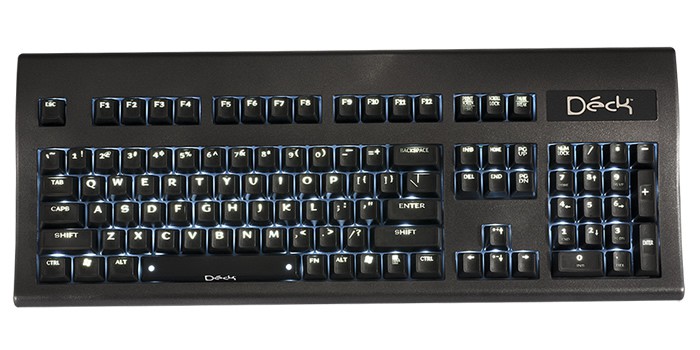 However, despite the price, I was super close to buying a Deck Legend. The reason I didn’t go for it was mainly due to availability (was a long 6 week wait time), limited switch options (no brown at the time…wtf?!), and I was a little worried about the process if something were to go wrong with such a boutique purchase. I would have had to purchase the keyboard directly from the manufacturer, instead of from Amazon, which I wasn’t so keen on. I’m sure Deck is probably a good company, but I KNOW Amazon is great to deal with, plus there’s some added peace of mind when buying through them.

Deck has since come out with a new model that is even more impressive than the Legend, but be prepared to pay dearly for it. Check out the DECK Hassium Mechanical LED Keyboard. This keyboard is phenomenal, and although they look a little gimmicky…the keyboard backlighting features are pretty badass!

After much consideration, I ultimately went with the Filco Majestouch-2. Everyone who’s owned a Filco has had nothing but great things to say about these keyboards, and I agree. They are extremely well built, no-nonsense keyboards.

They are practically featureless, but typing they do extremely well. I’ve been punishing mine for nearly 3 years and it still works just as well as the day I got it. The Filco is a joy to type on and it is built like a tank. It feels like a very high-end keyboard.

Another thing that’s remarkable about this keyboard are the keycaps. I’ve used the s**t out of mine for going on 3 years and only 2 of the keys show the slightest bit of wear. A slight corner of the A is missing and the % symbol is worn off. Key 5 is what I have my main spam ability set on for World of Wacraft, so that key gets a ton of usage. It’s amazing it’s not completely blank!

If you’re a touch-typist, unlike this hunt and peck guy, I’d suggest going for one of the stealth keycap models. They are completely blank on top and look amazing.

My only regret is that I did not get the Tenkeyless version. At the time I thought that I’d miss the number pad, but after nearly 3 years of use, I find I use it very little. Although the price is essentially the same, doing away with the number pad gives the Majestouch-2 a smaller footprint, and allows you to keep it a little closer to your mouse. I think it’s maybe more of a ‘gamer’ thing, but had I to do it over again, I’d have gone instead for the tenkeyless.

No doubt there are a ton of other options out there for mechanical keyboards, but to me, a lot of those I wouldn’t consider up to the standard of the ones I’ve mentioned here – especially the ‘gaming’ keyboards. Most of those are garbage.

If someone were to ask me which are the best options out there for mechanical keyboards… I would tell them:

The Filco Majestouch-2, Tenkeyless, if you prefer a smaller keyboard. The Filco may be short on bells and whistles, but it has unmatched build quality.

The Das Keyboard 4, if you want it all. This thing oozes quality and it has some amazing features to boot. Between the USB 3.0 ports, multimedia controls, mac compatibility and sexy aluminum top panel…this keyboard lacks nothing, IMO.