The other day I wrote a post talking about how I had consolidated 2 of my blogs in an effort to achieve symbiosis. The two blogs were pretty relevant to one another, so I decided to combine the fresher and highly targeted new site with the older, deeply indexed site. By doing this I was able to breathe new life into my older blog, while also being able to get my newer content seen a bit faster by adding it to an established site.

This week I’ve decided to do it again with 2 niche sites that I own. In this case I’ll be merging an older neglected site with a newer high-traffic site – both of which are focused on the same niche. The niche happens to be focused on a very popular video game produced by a company whose name rhymes with gizzard.

Site A was built a few years before the game was released and I sort of meandered around with its content. I had a few good articles here and there which generated some traffic, but because the game I was writing about hadn’t actually been released yet, it wasn’t a niche site I was really focusing on. I’d have flurries of activity, but then would go weeks and even months without posting. There were other sites I was more committed to at the time, so this site was an under-achiever.

Just prior to the game’s release I had an idea for a more focused niche concept for the same game, so I registered a new domain and started building site B. The new site was going to be highly targeted and more tailored towards monetization, where as the older site was mostly information and commentary, with a few ads scattered about.

The new site took off…fast. Within 2 weeks of its launch I had a sudden surge of a few thousand visitors per day, which dropped off for a few weeks, then after that I was seeing in upwards of 2,000 page views per day. To date, the highest traffic day has been just shy of 9,000 visits, which is much better than Site A, so you can imagine which site I was pouring the bulk of my efforts into.

Although Site A doesn’t get nearly as much traffic as site B, there are some good articles in there that could be of benefit to the newer site, plus I can’t stand the thought of just abandoning or deleting nearly 100 posts of mine. I like to leave my content on the web for posterity. 🙂

Note: Before deciding to merge any of your sites, first determine if it’s a beneficial or practical move. Obviously, the content of the transferred site should be relevant and of high quality. If you merge content that has little value to readers of the destination site, or if the content is thin and wishy-washy, that will hurt you in the long run.

Alright . . . so let’s get to merging these babies!

How to Merge Two WordPress Blogs

In case you’re thinking of doing something similar, here’s a quick tutorial on how to import content from one site to another. Keep in mind that this process only handles the content itself, which means no theme or plugin configurations will be moved over – just posts, categories, tags, pages, media files, users and comments.

The first thing you need to do is export the content from the WordPress site you’re going to be merging with the other site.

Since you’re likely to have a few duplicate pages such as: about, contact and privacy policy . . . you may want to delete these beforehand, along with the menu items which mirror those on the destination site. 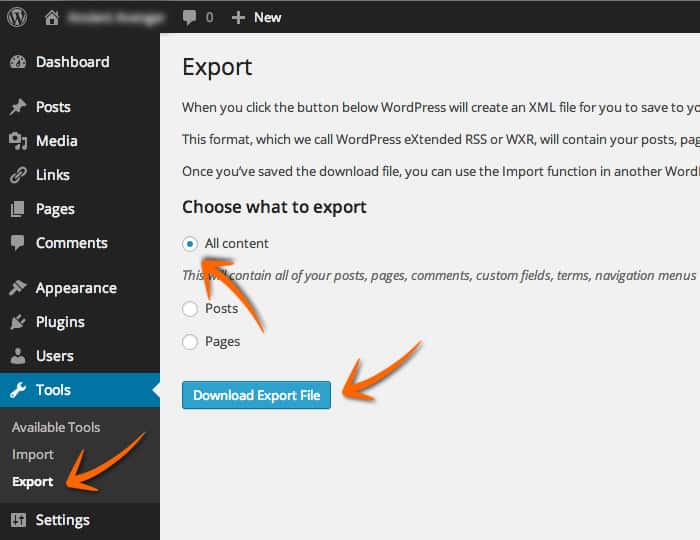 This step is not necessary, but before I run the export I like to tidy up the data I’m about to merge by optimizing the site’s database and removing any unnecessary garbage. This helps to ensure a trouble-free merging of content. WP-Optimize is a great tool for this.

Now you’re going to log in to the destination site and prepare for the content migration by installing the WordPress Importer plugin. 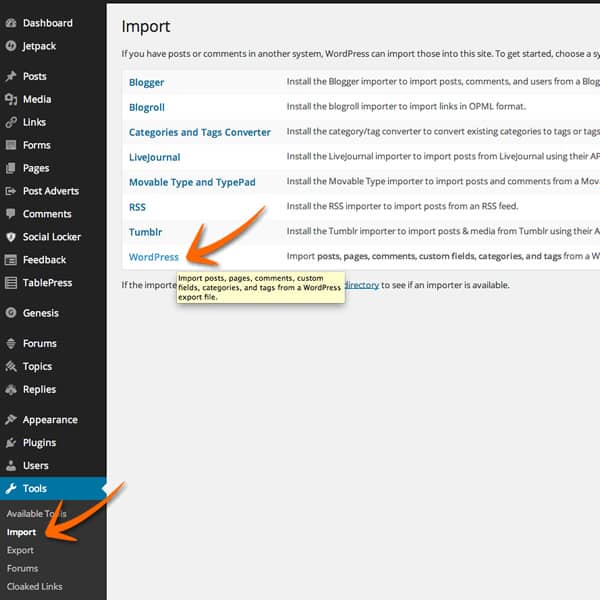 Now that you’ve installed the WordPress Importer plugin, now it’s time to bring the content in. 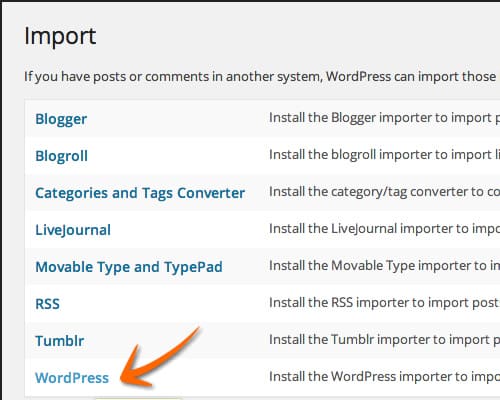 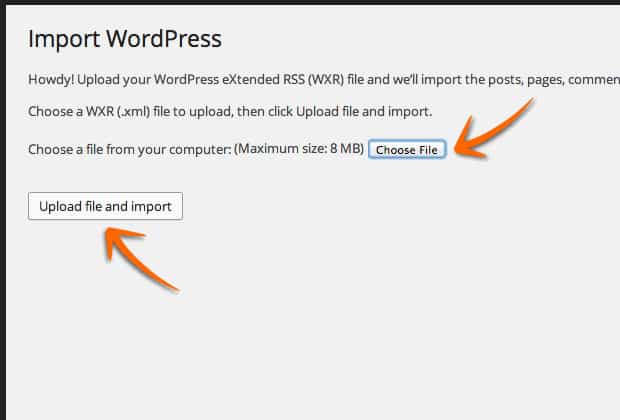 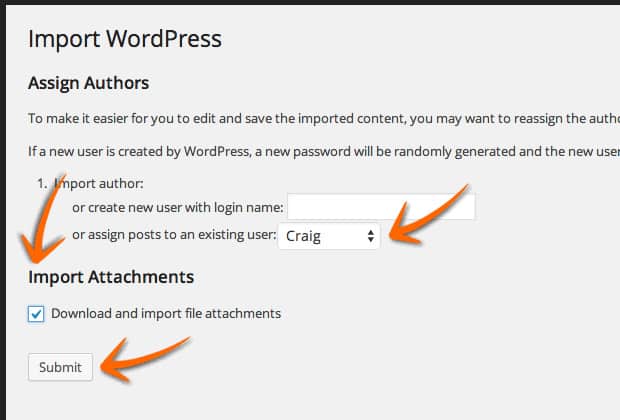 Step 4. Sort out your duplicate menu items and pages

If you didn’t delete your duplicate pages and menu items, then you’ll need to sort these out now. First place to go would be the WordPress menu (Appearance > Menus). Select your Primary Nav and remove any of the unnecessary items which are in there.

In my case I had an about page, contact, rss, and some social links which were duplicated. 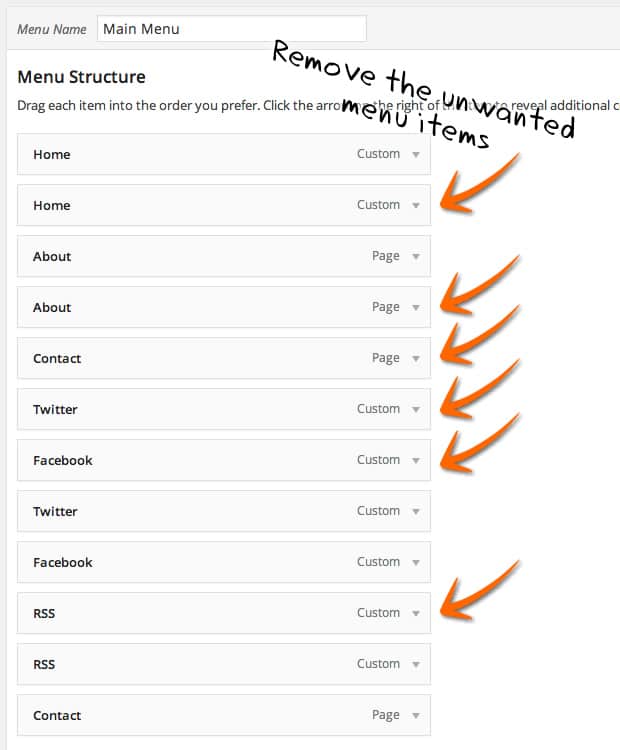 Expand the menu options and then click ‘Remove’ for the nav items you need to delete. 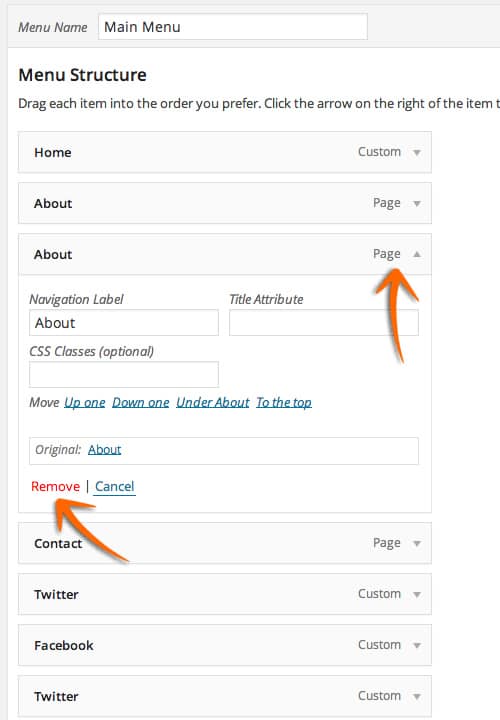 When you’re done, click the blue ‘Save Menu’ button at the bottom.

That about wraps it up, apart from one more thing . . .

If you’d referenced the old site’s URL several times throughout your posts, then you may need to perform a search and replace. If you don’t, you may confuse visitors.

Coming up next… Performing a WordPress Search and Replace…the right way, using this.

4 thoughts on “How to Merge WordPress Sites”